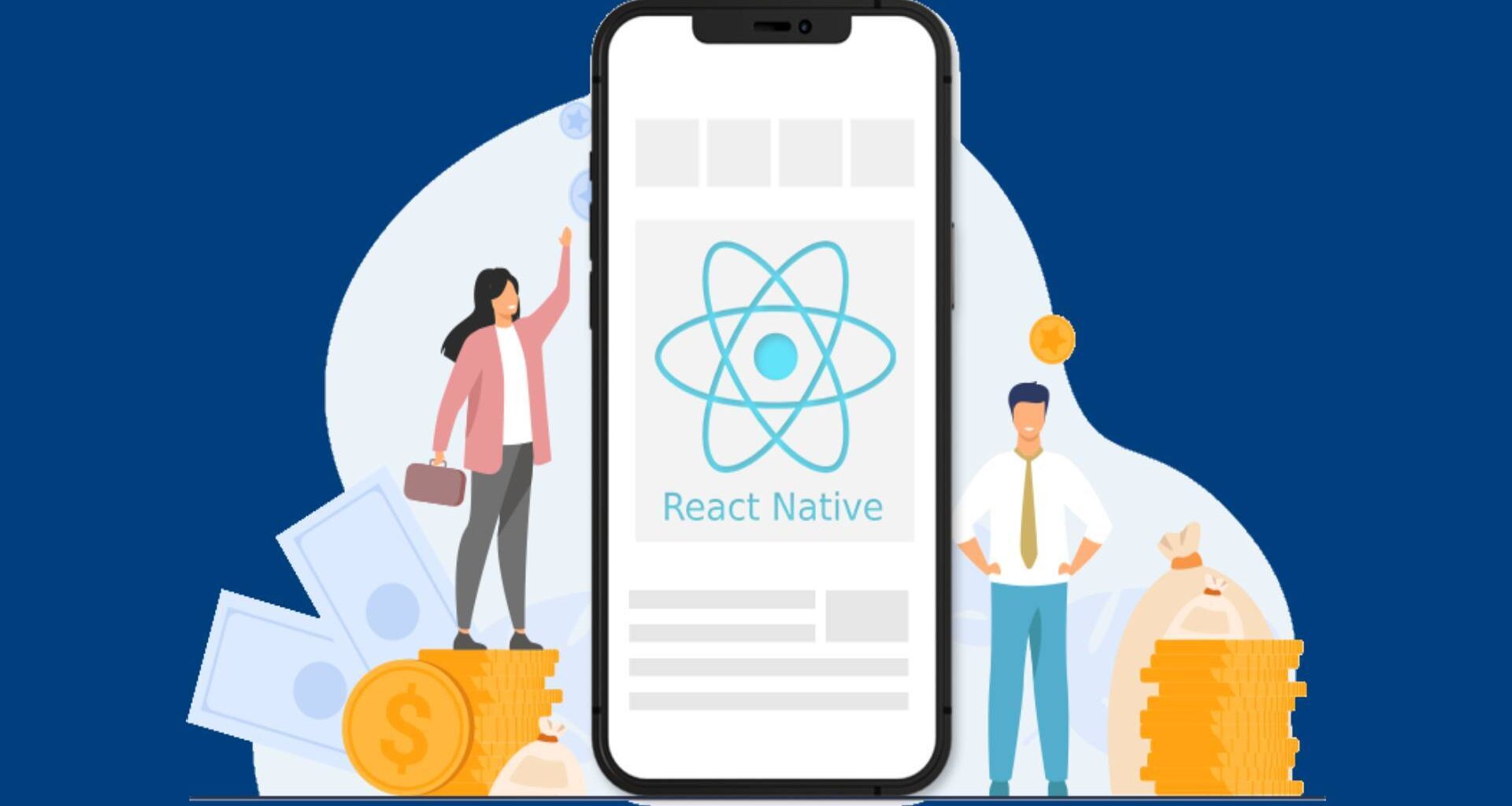 Why React Native Is The Best Choice For Fintech App Development?

Why is React Native considered the best choice for Fintech app development?

This is one question that has been most Googled in recent times. Being content writers, we always write about something that has been more discussed, generally because of curiosity and yes, for a good ranking in search engines.

So, here we are today with another blog on fintech. The Fintech industry needs no more introduction. Ever since the financial sector has shaken hands with the IT industry, there has been an immense success.

The fintech applications are one successful thing that came from this harmony. Fintech apps are literally saving the whole world from a lot of complications and confusion by making our daily banking transactions easy, quick, and secure. Both businesses and the general public are enthralled by this use of applications as they save lots of time and reduce the necessity of being present physically during payments.

I mean, the example is us alone. Since the introduction of these fintech apps, we have been doing all our payments online through mobile applications. No matter how small or big the transaction amount is. Payment through cash is an old tradition now.

And being a technical content writer, it is in my habit to always look at the technical aspect of everything.

So, according to you, what makes these applications so user-friendly?

Yes! You made the right guess.

It is the framework and the programming language that go behind these amazing applications.

And the framework or the programming language that makes this thing possible is React Native.

So, let’s answer your questions and dissolve your curiosity.

In this fast-moving digital world, programmers don’t have much time on their hands. This is because they have multiple tasks to perform in a short period of time.

In situations like this, if the developers have to develop separate applications of code for iOS and Android apps, things get more troublesome.

That is why frameworks like RN are used because they have a single code-base for both the iOS and Android platforms.

React Native was first put in motion by Facebook as an open-source plan in the year 2015. And it just took a matter of time for it to become one of the prime solutions in the mobile development space.

The RN framework has been built on React which is a famous Javascript library.

RN comprises cross-platform development which means when the right code is once written, it can be shared from 99% among the iOS and Android platforms. It offers ready-made code components and reduces the need to write everything from the start. This one feature increases the overall development speed.

Even when there are operation and design dissimilarities between the iOS and Android platforms, they will be spontaneously dealt with in the cross-platform development because of the combined codebase.

This will create a consistent app identity on both the platforms with a lot less effort compared to if it was built on native.

Native app development includes writing code individually and consistently. Plus, it will need two different software developers to work on the job, one for iOS and the other for Android.

But, in the case of React Native, you will need only one codebase to handle the two platforms, so everything will be in a single place.

Product development is way faster and more economical in the case of React Native because it requires fewer resources for writing the code. One more benefit of using RN is the immense popularity of this coding language for application development—Javascript.

If you ask any RN developer, they are extraordinarily confident in the features and benefits offered by this cross-platform app development framework. Thus, it is well trusted, tried, and tested by the developers.

The Popularity of Fintech Apps

Fintech apps are today’s most favored by everyone, whether youngsters or the elderly, as the general public tries to handle its financial responsibilities.

The fintech app development solutions give advantages to people who want to access their financial responsibilities with just a touch on the screens.

After all, the idea of availing of insurance cover, funds, stocks, and other financial tools with a single tap on the screen makes the all-handling of finances simpler than before. That is why React Native fintech apps are all the vogue today.

And a sturdy application development platform can create a valuable and efficient fintech application for diverse purposes. RN for fintech app development is an in-demand choice among the digital platforms used in the fintech domain.

And through this blog, you will all get to know more about the RN features and why they are the best choice for fintech apps.

Giant organizations like Facebook, Instagram, and Airbnb have already accepted this technology for their application development process.  RN still remains one of the noteworthy frameworks that attracts more and more enterprises and developers.

But, why is React Native so appealing to the entire fintech community?

One Code For Both iOS and Android

Mobile application development with the help of React Native has the potential to approach the vast variety of the target audience as RN uses one code for both the iOS and Android platforms.

FYI, Apple’s iOS and Android platforms cover 99 percent of the entire mobile app market. And a correctly written code can be shared from 90-99 percent between both the platforms.

Rather than writing the code from a clean slate, you can speed up your development process by using the ready-to-use components that React Native offers in fintech app development.

Native apps demand two separate development teams, one for Android and one for iOS. Thus, there are chances for the project to become inconsistent. Moreover, RN for fintech apps makes things possible and requires one team to develop an application on both platforms.

Developing applications with React Native will allow access to a wading pool of talents. The developer community of RN is gigantic and it continues to grow.

One can easily relocate web developers to the RN environment if the need arises. And they will already have knowledge of building a Fintech app using RN because it is just a Java script with a pack of components and APIs.

Fintech app development with RN provides one advanced feature: hot reloading. This makes it possible to implement the latest versions and modify the UI without quitting the running application.

React Native in Fintech will allow you to build native-live applications that perform similar to native-built solutions and offer highly smooth animations.

Using RN offers an optimal user experience across both platforms.

Drawbacks to Building a Fintech App With React Native

Despite the immense benefits, there are certain drawbacks and challenges associated with RN.

Nothing is perfect; everything has two sides. And since we are covering everything about RN in fintech, it is necessary to also mention the cons of React Native.

So, some of the drawbacks of React Native are:

As such, this is not a big problem because most of the custom modules that are available are precisely documented and work properly. However, in the midst of increased complexity, heading towards native technology will be more beneficial.

Using React Native in Fintech with a high degree of tech intensity and futuristic functionality will lead to reduced performance as compared to the application created in a native language.

Implementation of React Native in fintech is relatively new, and it often makes it a project for changes and improvements. Due to this, developers are strained to come up with customized solutions.

The introduction of the RN Framework has revolutionized the way in which mobile app location development is done today.

Decisions are made on what kind of technology should be used for achieving the goal based on different features for accomplishing the desired results.

With this revolutionary approach to mobile development, the built product will be highly flexible, and it is one of the important elements of success.

Many financial organizations choose the RN framework to build their cross-platform solutions.

We at Extern Labs are well-versed in developing fintech apps using React Native in the shortest possible time. We are here to use our knowledge and experience to help you develop the best product.

If you have finalized the RN framework for your upcoming Fintech application, then contact our team today to hire a React Native developer.

We will be more than glad to help you with your future projects and will try to become a part of your success.

Acknowledging that the fintech area is very competitive and flexible, there are valid reasons to choose RN as an option for developing a fintech product.

These reasons, as mentioned above, are enough to persuade you to choose RN as a perfect technology for fintech app development.

Who knows, this could be the cornerstone of your success in today’s competitive era.

Top ReactJS Framework For Developers in 2022

Technology Trends In Fintech That Will Rock In 2022

JJavaScript
Read More
Lodash is one of the popular JavaScript libraries that offers more than 200 functions for web development. These…
MMobile App Development
Read More
There is a new trend seen in the recruiting business in recent years. With the evolution of technology…