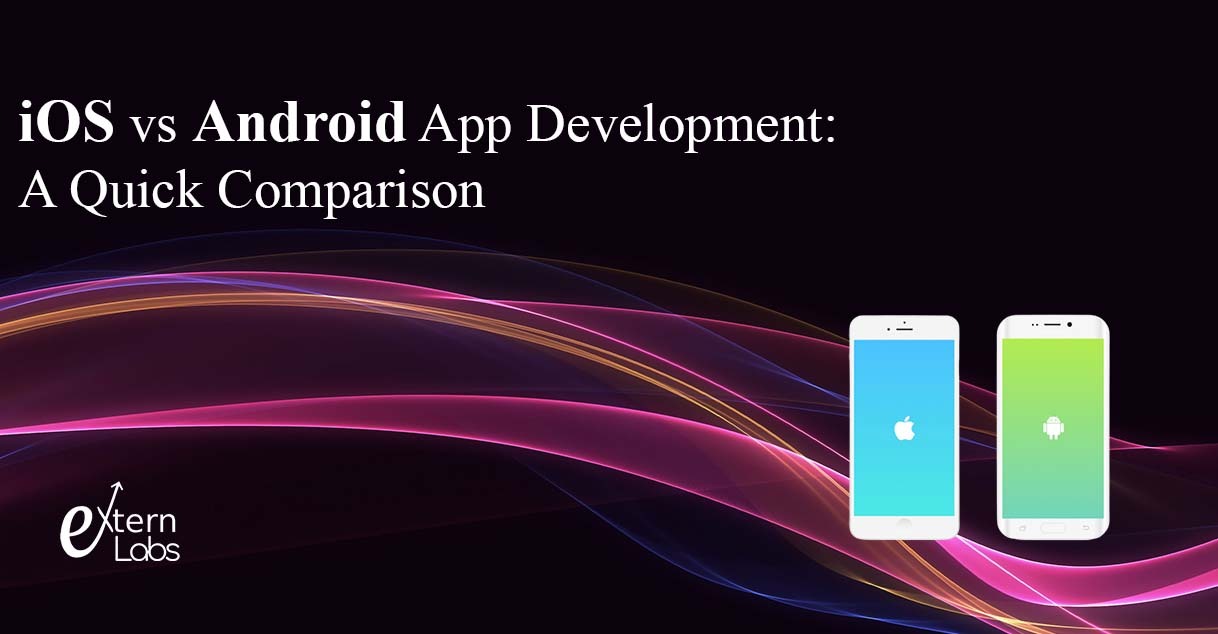 Mobile app development is a vigorously growing market in the software production segment.

Because of the ever-augmentation of individuals accessing the internet through their mobile phones and tablets, they open up a greater opportunity for businesses to reach a large audience through mobile app development.

If you are thinking of developing a mobile and tablet application, you must be aware that the mobile industry is divided between Apple iOS apps and Google Android apps. Therefore, there is always a comparison between Android apps vs iOS apps whenever someone wants to develop apps for the mobile platforms.

Both the platforms are good, but choosing one can get tedious. By explaining the difference between the Apple and the Android apps, we are trying to make things simpler for you.

Android and iOS are the two smartphone operating systems (OS) on the market. An OS is an application that acts as an interface, linking the hardware and the software.

This segment contains statistics for iOS vs Android development comparisons based on their popularity and revenue generation.

According to Business of Apps, app revenue data, as of 2022, even though iOS holds less than 15 percent of the total market share, it leads the way in revenue generation for app development.

This is because Apple phones (iPhones) are popular in high-income regions like Japan and the US, where they also spend more on applications.

Whereas Android’s largest markets are in India, Southeast America, and Southeast Asia, it generates less revenue per user.

Android and iOS app monetization are $133 billion in 2021, a 19 percent year-on-year increase. However, iOS is accountable for 63% of total app profits.

Android has experienced a 167 percent increase in revenue in the last four years, but it still lags compared to Apple’s app store in total yearly revenue.

Google play made less revenue as compared to iOS, but the overall ecosystem has grown each year.

According to another statistic based on consumer age between Android apps vs iOS apps, Apple devices are selected by 70 percent of 18-24 year-olds. However, Android is chosen by 49 percent.

Android is an open-source operating system (OS) built by Google. Its several models are used in thousands of devices, from smartphones to smart household gadgets. Because of its open-source nature, it can be used for free. Companies like LG, Sony, Samsung, and Xiaomi consistently employ Android for their smart gadgets.

Initially, Android mobile applications were developed in Java, but it has switched now to Kotlin when in 2019 Goggle announced Kotlin as its new programming language.

You can learn more about Java and Kotlin through our post.

Apple mobile devices are furnished with an OS unique to Apple gadgets- the iOS. The iOS is more closed-off compared to the Android and uses a standardized UI which promotes very few customization options.

Converse to this, Apple’s designs promise you will end up with aesthetically pleasing visuals. All the latest Android apps are designed in the Swift programming language.

Swift was first introduced in 2014, and quickly got replaced for mobile purposes. Earlier, Apple’s programming language of choice was Objective-C.

Even with these surface similarities in iOS vs Android development comparison, both the OS are exclusive and call for separate skill sets and peculiar techniques to development.

There is still no champion when it comes to comparing Android apps vs iOS apps. Both are the best platforms. And so many iOS and  Android mobile app development companies strongly believe that the selection of platforms greatly depends on the type of audiences you want to target.

Let’s have a look at some of the benefits Android and iPhone app development offers to enterprises.

Everything is not entirely perfect, it’s the same with the Android mobile operating system.

Some of the limitations of iOS are-

The development of your application and its growth will highly rely on the type of platform you choose.

Android apps are generally created in Java and its related languages. Java is the most common programming language, and it is the most favored language among app developers.

Whereas iOS apps are designed in the Objective-C language. It is also an easy language, especially if you already have knowledge of C and C++ development.

Android possesses an open development platform that also endorses several third-party apps and tools. It is a good thing for developers as it means they can experiment with various features and can add more functionalities to their applications.

Apple also has its own application development platform, but with a limited set of tools. However, developers can use external tools for app development, but it restricts them from experimenting with new things.

Due to lean types and devices, iOS app development is easier as compared to Android apps.

The Android OS is used by many gadgets of distinct build and development needs. iOS is utilized only on Apple devices, and all follow the same build.

Apple’s app development platform is unique and stable, with specific tools and restrictions. Whereas, the Android OS is versatile and entails dynamic app development for every purpose, and even for multitasking.

This is a useful feature, but it also generates issues for beginners who are not familiar with the idea of multitasking in apps.

Even though Android and iOS are for cross-platform development, because of the huge variety of gadgets, Android application development takes more time than iOS app development.

iOS programmers have to create applications for only one platform, so it takes very little time.

The app development cost depends on various factors such as the number of targeted gadgets, development platforms, tools, and more.

Android app development comparatively costs more, mainly because of its wide range of devices and platforms. But the good thing is Integrated Development environment availability like Android Studio can work on any latest PC, as against Apple’s Xcode development platform that only works on Mac systems.

Are you confused about which Integrated Development Environment Availability is better?

Well, between Android Studio and Xcode, both have their equal share of pros and cons.

Android Studio can efficiently generate multiple versions of apps for various devices and offers a flexible system. On the other hand, Xcode contains a noble source editor. But it is superficial. All developers have their own preferences based on their habits and likings.

The Android development platform is armed with the best testing environment with all the testing tools that programmers can use to test their applications before publishing them.

Apple’s Xcode also incorporates a testing platform, but it is not as good as what Android provides.

Publishing apps in the Play store is a very smooth process. It generally takes a few hours for an app to go live after the approval process.

However, the Apple store will first test your application for every possible bug and verify deeply before approving it. It is a time-consuming process and also costs extra than the Play store.

Moreover, in cross-platform development, the code design gets complex and there will be a shortage in terms of features and flexibility.

iOS vs Android Development Comparison: which one is better?

In this comparison of Android apps vs iOS apps development, you might have guessed by now, that the answer to this question is: it depends on your project requirements.

Thus, before starting a mobile app development process you should go through your business goals, needs of your targeted audience, developmental cost, time, and possible obstructions.

Regardless of your decision in this ultimate comparison of Android apps vs iOS apps development, hiring an expert mobile app development company will certainly increase your chance for success.

And since you are here and you have read our article, please check out our mobile app development services. We would love to hear about your new project and idea.

How To Develop A Classified Mobile App Like OLX And eBay